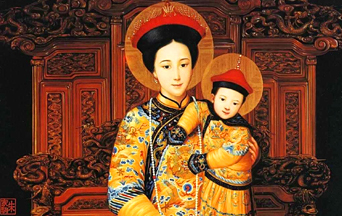 On February 25, 2018, the Brazilian-based Plinio Corrêa de Oliveira Institute sent a letter to Joseph Cardinal Zen Ze-kiun in support of the heroic persecuted Catholics of the underground Church in China.

The text of the letter can be found below. Those who wish to add their name to this letter of support may do so at this link.

The Plinio Corrêa de Oliveira Institute, a civic association that continues the work of the distinguished professor whose name it bears, and its co-signing autonomous sister organizations around the world work to defend the perennial values of Christian civilization. Their directors, members, and supporters are Roman Catholics who fight the onslaught of communism and socialism.

The fundamentally anticommunist position that results from the Catholic convictions of our organizations has been reinvigorated by the heroic resistance of the “underground Church” faithful to Rome. Its bishops, priests and millions of Catholics refuse to submit to the so-called Patriotic Church, schismatic in relation to Rome, and entirely submissive to the central power of Beijing.

Quoting these divine words of Our Lord Jesus Christ, we express our admiration for the sole Catholic Church in China, today under the Communist boot, of which Your Eminence is a distinguished member and spokesman. We see these persecuted Catholics as brothers in the Faith to whom is addressed the 1974 Resistance Declaration authored by the eminent Brazilian Catholic leader Plinio Corrêa de Oliveira (1908-1995), founder of the Brazilian Society for the Defense of Tradition, Family and Property and inspirer of autonomous TFPs and sister organizations throughout the world. That document is titled “The Vatican Policy of Détente with Communist Governments – Should the TFPs Stand Down? Or Should They Resist?” (see attached).

As Your Eminence can read in this 1974 Declaration, Vatican diplomacy in both Eastern Europe and Latin America pursued a devious policy of rapprochement with communist regimes that was severely detrimental to true Catholics and would result in subjecting the Holy Catholic Church to the red despots.

On April 7, 1974, the press in South America’s largest city (Cf. O Estado de São Paulo) reported on an interview by Archbishop Agostino Casaroli asserting that “Catholics are happy in the socialist regime” that Castro’s communists imposed on the unfortunate island of Cuba. Archbishop Casaroli went on to say that “the Cuban Catholic Church and its spiritual guide always seek to avoid creating any problem to the socialist government that rules the island.”

These statements by the high-ranking Vatican envoy—which coincided with the positions of other prelates who collaborated with communism—painfully surprised and caused moral trauma among Catholics faithful to the immutable social and economic doctrine taught by Leo XIII, Pius XI and Pius XII. This Ostpolitik, as it became known, was a source of perplexity and anguish and aroused a most profound and poignant drama in many souls. Indeed, over and above social and economic questions, it involves what is most fundamental, vibrant, and tender in the soul of a Roman Catholic, his spiritual union with the Vicar of Jesus Christ.

The Vatican policy of rapprochement with Communist governments raised a supremely embarrassing doubt: Is it licit for Catholics not to move in the direction indicated by the Holy See? Is it licit for them to stop resisting communism?

We are now going through a similar but even more dangerous situation with the Vatican policy toward the so-called Patriotic Church submissive to Beijing.

In fact, the Catholic world is shocked by the recent visit to China of a Vatican delegation led by Archbishop Claudio Maria Celli. While there, on behalf of Pope Francis, he asked the legitimate shepherds of the dioceses of Shantou and Mindong to hand over their dioceses and flock to illegitimate bishops appointed by the communist government and separated from the Holy See.

The words of Archbishop Marcelo Sánchez Sorondo, Chancellor of the Pontifical Academy of Sciences and the Pontifical Academy of Social Sciences, known as a close advisor to the Holy Father, arrived as a terrifying and amplified repetition of Archbishop Casaroli’s statements in Cuba. According to the Turin daily La Stampa of February 2, he affirmed: “At this moment, the Chinese are those who best implement the social doctrine of the Church…. The Chinese seek the common good, subordinate things to the general good.”

After visiting a country crushed by a dictatorship even more ruthless than the Cuban one, Archbishop Sánchez Sorondo, like Archbishop Casaroli, stated: “I found an extraordinary China; what people do not know is that the central Chinese principle is work, work, work. I found no shantytowns, you do not have drugs, young people do not take drugs…. [China] is defending the dignity of the person….”

He did not say a word about the religious persecution that communists inflict on our brethren in the Faith, on imprisoned bishops, priests, and faithful, or on the systematic and universal violation of the fundamental rights of man, created in the image and likeness of God.

The controversial and false assertions of this high-ranking Vatican prelate go far beyond the statements by Archbishop Casaroli in Cuba in that remote year of 1974. And they hurt the upright Christian conscience even more.

The current drama of Chinese Catholics is also that of all faithful wishing to persevere as they face the Communist Leviathan. Yesterday and today, pressured by the Holy See’s diplomacy to accept an iniquitous agreement with the communist regime, they face this excruciating problem of conscience: Is it licit to say no to the Vatican Ostpolitik and to continue resisting communism even unto martyrdom if necessary?

In the abovementioned 1974 Resistance Declaration, Prof. Plinio Corrêa de Oliveira affirmed (without having received any objection from Paul VI or any successor Pope) that it is not only licit but even a duty to imitate Saint Paul’s attitude of resistance toward Saint Peter, the first Pope:

“‘Resistance’ is the word we choose purposely, for it is employed in the Acts of the Apostles by the Holy Ghost Himself to characterize the attitude of Saint Paul toward Saint Peter, the first Pope, who had taken disciplinary measures to sustain some practices from the old Synagogue in Catholic worship. Saint Paul saw in this a grave risk of doctrinal confusion and harm for the faithful. He then stood up against Saint Peter and “resisted him to the face” (Gal. 2: 11). In this zealous and inspired action of the Apostle of the Gentiles, Saint Peter did not see an act of rebellion, but rather one of union and fraternal love. Knowing well in what he was infallible and in what he was not, Saint Peter submitted to the arguments of Saint Paul. The Saints are models for Catholics. Accordingly, in the sense in which Saint Paul resisted, our state is one of resistance.

To resist means that we will advise Catholics to continue to struggle against the communist doctrine with every licit means in the defense of their threatened countries and Christian civilization.

To resist means that we will never use the unworthy resources of sedition nor, much less, take attitudes inconsistent with the veneration and obedience due to the Supreme Pontiff according to the terms of Canon Law.

The Church is not, the Church never was, the Church never will be such a prison for consciences. The bond of obedience to the successor of Peter, which we will never break, which we love in the most profound depths of our soul, and to which we tribute our highest love, this bond we kiss at the very moment in which, overwhelmed with sorrow, we affirm our position. And on our knees, gazing with veneration at the figure of His Holiness Paul VI, we express all our fidelity to him.

In this filial act, we say to the Pastor of Pastors: Our soul is yours, our life is yours. Order us to do whatever you wish. Only do not order us to do nothing in face of the assailing red wolf. To this, our conscience is opposed.”

In the 1970s, we were also happy to see in the glorious ranks of the Chinese episcopate the fearless resistance of Your Eminence’s illustrious fellow countryman, Paul Cardinal Yü Pin, then archbishop of Nanjing and dean of the Catholic University of Taipei, Taiwan (Cf. The Herald of Freedom, Feb. 15, 1974, quoting a release from the Religious News Service).

Cardinal Yü Pin told the agency above (and Your Eminence confirms this) that it would be an illusion to expect Communist China to change its anti-religious policy.

Proof comes from none other than President Xi Jinping, who, at the 19th Congress of the Chinese Communist Party, emphasized that, “culture should be harnessed to the cause of socialism and following the guidance of Marxism” and, because of that, “Religion must also be ‘Chinese in orientation’ and guided by the party to adapt to socialist society” (The Washington Post, Oct. 18, 2017).

Returning to Cardinal Yü Pin, he added, forty years ago, “We want to remain faithful to the perennial values ​​of international justice … The Vatican can act otherwise, but that would not move us much. I think it is an illusion to hope that a dialogue with Beijing would help Christians on the (Chinese) continent…. The Vatican is obtaining nothing for Christians in Eastern Europe…. If the Vatican cannot protect religion, it has no reason to pursue this matter.…We want to remain faithful to our mandate but are victims of communist repression. With this rapprochement (between the Vatican and Communist China) we would lose our freedom. As Chinese we must fight for our freedom.”

To these lucid and vigorous observations reminiscent of St. Paul’s “I resisted him (St. Peter) to his face” (Gal. 2:11), Cardinal Yü Pin added this moving remark: “There is an underground Church in China. The Church in China will survive just as the early Christians survived in the catacombs, and this could mean a true Christian rebirth to the Chinese.”

Accordingly, the Plinio Corrêa de Oliveira Institute, its co-signing autonomous sister-organizations around the world, and the thousands of individual Catholics signing on to this message of moral support, hereby,