Minister for Children and Youth Affairs, Katherine Zappone, delivered the keynote address to the Copenhagen Conference on Private and Family life for LGBTI people, held in the parliament of Denmark.

In her speech, which was widely reported in the media, Minister Zappone pontificated about how the Catholic Church should conduct itself, especially in relation to the World Meeting of Families, to take place in Dublin later this year.

She warned the Church that “LGBTI families, like all families, should be celebrated and not excluded,” saying: “that’s the message that should be coming not just from the World Meeting of Families…” Etc.

The minister seems to think that it is within her jurisdiction to make proclamations on what the message of the Church should be. 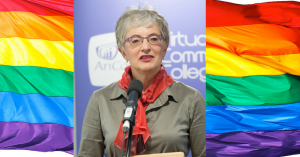 In the same vein, after mentioning people who are discriminated against, threatened and abused, she said: “The World Meeting of Families is a unique opportunity to confront such inequality, discrimination and hate. It can provide global leadership on inclusion.”

She expressed hope that the World Meeting of Families would “not be used as a platform for remarks which exclude, isolate or hurt any family.”

Remarks which exclude, isolate or hurt any family!!!

Did Ms. Zappone stop to consider whether her own remarks might have excluded, isolated or hurt any family?

Whether made wittingly or not, Minister Zappone’s statement expresses an attitude that is dangerous to public discourse in a free society.

Of course, except in the modern false conception of the dynamics of public debate, remarks per se don’t have the capacity to exclude or isolate.

They can hurt, yes! But even that is a reaction to the remarks – not necessarily an objective result of the remarks themselves. Those who make the remarks are not usually responsible for how others react to them.

These days much public discussion is restricted in order to rule out any remarks that might be hurtful. This concept has even crept into legislation leading to an anomalous situation where the legality or otherwise of one’s words depends on how those who hear them react.

In other words, something you say can become illegal retroactively.

This thinking favours totalitarianism, as what is offensive or hurtful can be decided on the hoof. It doesn’t need to be defined during the legislative process, and thus is open to subjective interpretation afterwards.

It is not surprising that this quasi-totalitarian way of looking at speech is supported by a minister in the current Irish government.

So, could Ms. Zappone’s remarks be exclusionary, isolating or hurtful?

It seems that she used her platform in the Danish parliament to exclude and isolate certain families – those that accept and try to uphold the perennial teachings of the Catholic Church, especially its teaching on homosexuality, which hasn’t changed in spite of Ms. Zappone’s pronouncements.

Could any such families have been hurt by her remarks? Assuming that any bothered to listen to her, they could have found her remarks hurtful.

The tone of Ms. Zappone’s speech was one of antagonism towards the Catholic Church. In it she denounced the exclusion of “our former president Mary McAleese from an event in the Vatican, together with the airbrushing out of images of LGBTI families from certain church literature related to the event (the World Meeting of Families)” as a source of serious concern.

As if the mission of the Church was to promote the “LGBT” agenda!

“All aspects of our public life must be inclusive. There should be a welcome for all. And never again should public statements or remarks which seek to isolate certain families be tolerated,” Ms. Zappone declared in a statement that contradicts itself, since her whole tone is one of rejection for anyone who follows the teachings of the Catholic Church, or indeed of most Christian denominations.

The minister also spoke about how: “equality is hard-fought, difficult to achieve, but more importantly it is also very fragile. As campaigners, as activists and as governments, we must ensure that no gathering, group or individual is ever allowed to undermine these rights.”

In other words, one side gets to define “equality” and what it means to “undermine these rights.” And if we understand her point correctly, one of the roles of government is to clamp down on dissenting opinions and to shut down all opposition – effectively to prohibit public debate.

That someone who promotes this notion could hold a ministry in the Irish government really is “a source of serious concern.”

Not even the Pope can hope to wield such authority.